As you might expect, Lyft has reams of data about its customers’ ride-sharing habits — who is calling rides, where and when. That data led to an unlikely avenue to try connecting with its audience at a deeper level: beer.

Starting next week, the nation’s second-largest ride sharing company will team up with Chicago’s Baderbrau Brewing on Five Star Lager, a brand both companies envision drinkers reaching for at the end of an evening out — just about the time they’re deciding how to get home. 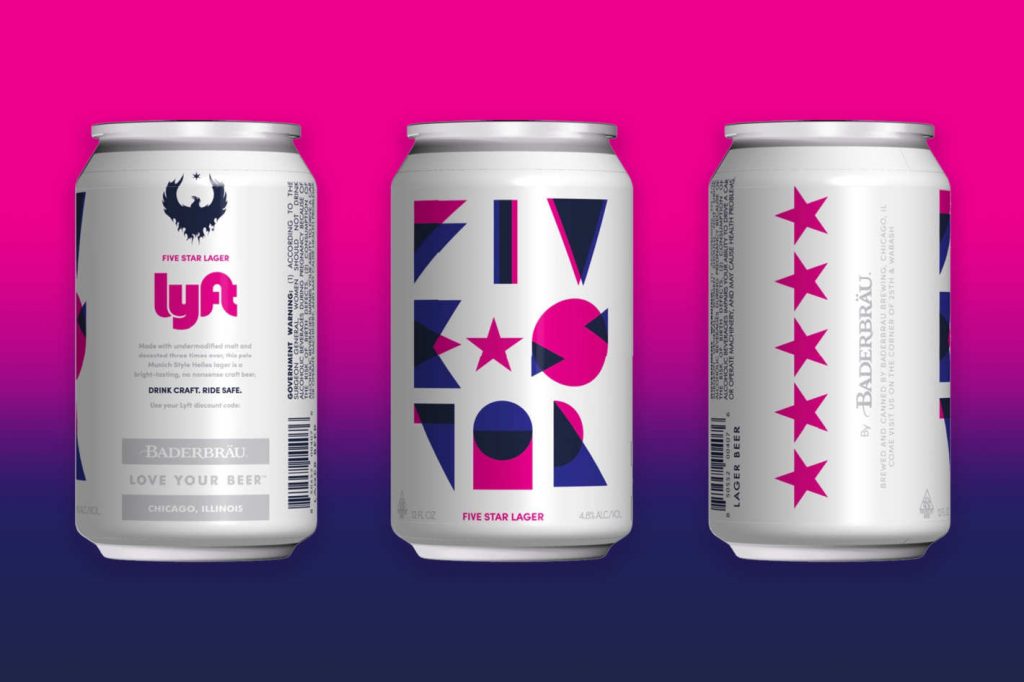 The partnership achieves a longtime goal for Lyft of getting inside bars. Though centered initially in Chicago, the initiative could expand to other cities.

Five Star Lager will be available only in bars and only in 12-ounce cans, each of which will feature a discount code for as much as $5 off a Lyft ride. The beer is in fact a rebranded version of one of Baderbrau’s easiest-drinking beers, South Side Pride, a crisp helles lager.

The hope, Baderbrau co-founder Rob Sama said, is that bar goers will be inclined to end evenings with an easy-drinking palate cleanser such as Five Star. And while drinking it, a customer will enter the discount code into the Lyft app and get a discounted ride to their next stop.

San Francisco-based Lyft has long dabbled in what it calls a “safe ride” program, including one with a far bigger beer company: Anheuser-Busch, which for two years running has offered up to 150,000 round-trip Lyft rides during weekends and holidays in 10 states via its social media channels.

But for Five Star Lager, which is named for the Lyft rating system, Lyft wanted to team with a smaller brewery, Katcher said — “a brand that has more impact with locals.” The beer will debut at a party at 5:30 p.m. at Baderbrau on Jan. 18. The next night it will be available at 10 Chicago bars with a heavy marketing push of posters, glassware and coasters. The beer will roll out to an additional 20 or 30 bars at a time throughout the coming months, Sama said.

Lyft has committed to a run of 1,000 cases — 24,000 cans — of Five Star Lager before evaluating the effort. Katcher declined to describe the financial details of the partnership.

Five Star marks the second high-profile marketing partnership for Baderbrau in recent months. Late last year, it joined forces with the Billy Goat restaurant chain to brand two previously-existing beers in the Baderbrau lineup as Billy Goat Pilsner and Billy Goat IPA. Baderbrau, which made 3,500 barrels of beer in 2017, expects to double production in 2018, thanks in part to its Lyft and Billy Goat projects. Katcher said Five Star could be unfurled to other markets or the company could team up with local breweries in other cities. Or, if the brand doesn’t resonate, it could end after the 1,000 cases are sold.

Five Star’s discount offers 40 to 60 percent off a Lyft ride up to $5. The code expires within seven days, and is usable only on “classic” Lyft rides — not the carpooling Lyft Line service or Lyft Plus, which employs larger vehicles.