THE WORLD HAS a new largest plane, and it looks like nothing you’ve ever seen at the airport. But this funky behemoth isn’t for carrying passengers. It’s for hoisting satellites into outer space. The twin-hull Stratolaunch Aircraft looks like two seagulls joined at the wingtip. It sports 28 wheels and six engines, and it’s the newest, boldest, entrant into the air launch business.

Microsoft co-founder Paul Allen founded Stratolaunch in 2011, aiming to make it easier to access space. Its enormous, catamaran-like aircraft will carry ‘air launch vehicles’ between its two fuselages and hoist them into the upper atmosphere. From there, the little launchers will fire their own rockets and shoot the rest of the way into low earth orbit.

The Stratolaunch aircraft—whose 385-foot wingspan triples that of a Boeing 737—is the work of Mojave, California-based Scaled Composites. This week, the legendary aerospace design shop wheeled the plane out of the hangar for the first time. 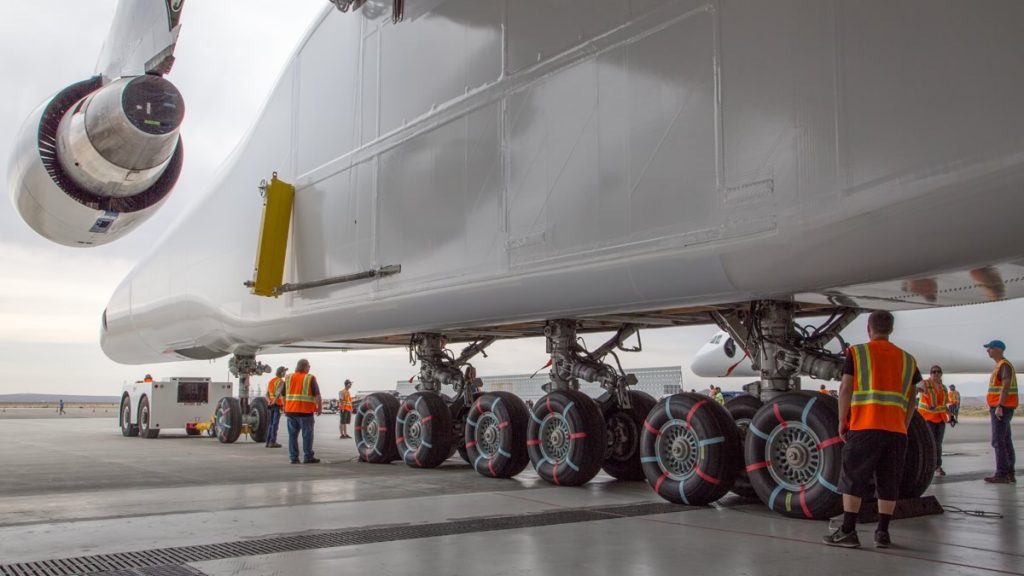 Stratolaunch may be the biggest, but it’s far from the first to consider ‘air launch to orbit’ to supplement rockets.

Traditional rockets expend an enormous amount of energy flying straight up through the dense, lower bits of the atmosphere. That’s why they’re built in disposable stages, which jettison when they’re out of fuel. A plane whose long wings generate lift from that thick air can easily reach tens of thousands of feet of altitude. But the payload plane-based launch systems can carry has traditionally been much smaller. Enter the heavy-lifter Stratolaunch plane.

Launching from a runway rather than a pad means more flexibility, as well as lower cost. Rocket launches have tight windows of time, because orbital engineers have to wait for the Earth to rotate to the right point to reach a desired position in space. A giant plane is only limited by the availability of giant runways, and can take off whenever it likes.

Stratolaunch is designed to carry up to three Pegasus XL air launch vehicles, each capable of hauling a 1,000-pound satellite into low Earth orbit. The company says it’s looking into medium and large, solid and liquid fueled launch vehicles, which would boost the size of satellites they could carry.

Prett F*cking cool right?  The things we as humans are doing with Technology now are truly amazing.