It’s official, Nike CEO Mark Parker said on a call with investors that Nike is partnering with Amazon, the deal hadn’t yet been confirmed, though rumors started swirling last week. But there’s no doubt now: Nike, which had long resisted the e-commerce behemoth, will start selling its products directly through the site.

Or some of them, at any rate. Parker and Nike brand president Trevor Edwards both emphasized repeatedly on the call that Nike is starting with a pilot program that will include a small, carefully segmented assortment of footwear, apparel, and accessories in order to test the waters. The move, though it may have seemed inevitable given Amazon’s overwhelming dominance of US e-commerce, carries real risks as well as potential benefits for Nike, and it clearly doesn’t want to rush in.

The upside for Nike is that it will get access to Amazon’s many millions of users, including the estimated 80 million in the US who are high-spending Prime members. Amazon is rapidly growing into the top e-commerce destination for apparel and footwear in the US, and recently announced a new program called Prime Wardrobe that will allow members to order clothes for free and only pay for those they decide to keep. Nike would certainly love to be part of that, especially since its main rival, Adidas, will be. Amazon gives Nike another big distribution channel, too, at a moment when sporting goods retailers and department stores are stumbling. 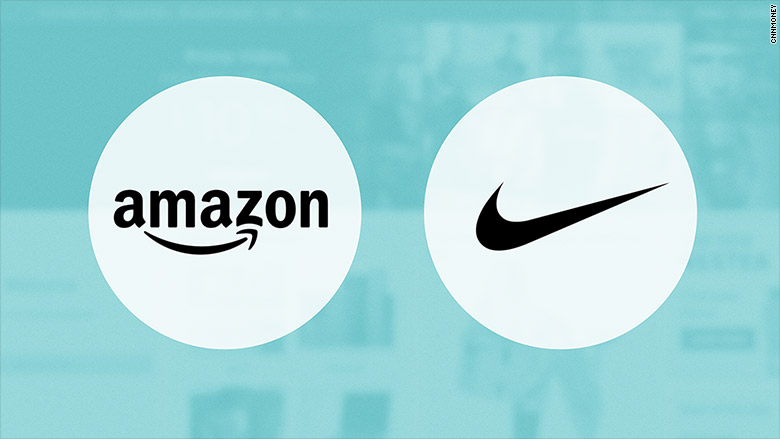 Importantly, Nike will also finally gain a level of control over the Nike products already flooding the site. Even though Amazon wasn’t previously a Nike partner, it’s marketplace of third-party sellers was full of Nike goods, so much so that Nike was estimated to be the most-purchased apparel brand (paywall) on the site. Those unauthorized Nike products could include possible counterfeits. Parker made clear that he wanted to improve the customer experience and brand storytelling around Nike on Amazon, and with the new partnership, Nike will have more leverage to dictate what is—and isn’t—allowed to be sold through the site.

But the deal also puts Nike’s brand in potential danger. Amazon’s no-frills site layout is all about easy transactions and serving up the lowest prices. Amazon offers a price-matching guarantee, for instance, and Nike could be pressured into aggressively discounting what it sells on the site. The scenario runs counter to Nike’s longtime mission of maintaining a premium, tightly controlled image. Elaine Kwon, the former head of Amazon’s luxury retail division and now founder of an e-commerce consultancy, recently told Racked that selling through the site can create “a downward spiral of brand equity.”

But the pressure to sell on Amazon has grown significantly. In the US—Nike’s home turf and the world’s largest market for sporting goods—Adidas has doubled its market share at Nike’s expense. Most of Nike’s growth is coming from overseas and direct-to-consumer sales at this point, which Nike wants to continue to emphasize. The Amazon deal is attractive, and Nike is wading in—cautiously. It says it will see how things go before moving to scale up its offering.