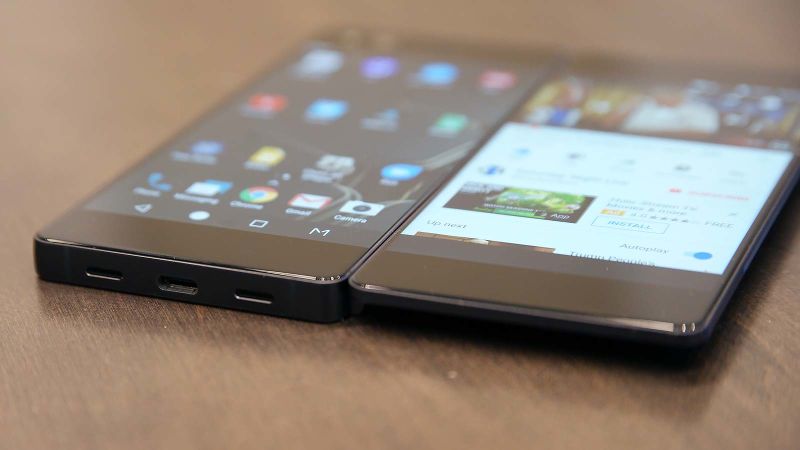 The Axon M provides a 6.75-inch diagonal display when unfolded, allowing users to view 2 things at once or watch a combined full-screen image.

ZTE has announced its Axon M smartphone, a dual-screen handset which unfolds in the middle to expand its screen into a 6.75-inch diagonal display for watching movies, viewing emails, using two apps simultaneously or sharing screens with a pal.

Smartphone makers have talked about designing handsets with folding screens for several years. But ZTE apparently has beaten Apple, Samsung and others to the punch, unveiling its design at a special event in Brooklyn, N.Y., on Oct. 17.

The Axon M will go on sale in the U.S. within the next month exclusively available through AT&T, although ZTE didn’t specify a release date. It will also go on sale in China, Europe and Japan. The price of the 4G LTE phone through AT&T will be $725.10 after 30 monthly payments of $24.17 on an AT&T Next purchase plan.

The phone has twin 5.2-inch full HD TFT LCD displays on the front and back of the handset that can be unfolded into a wide 6.75-inch diagonal viewing screen. Each screen provides 1920×1080 resolution and is covered with Corning Gorilla Glass 5 for protection.

By including a folding screen, the Axon M can be used in four modes—a dual mode for side-by-side apps running at the same time; an extended mode using the entire 6.75-inch display for viewing videos or web pages, a mirror mode to share the same content with friends on the other side of a table, or use it like any other smartphone that you can hold in one hand.

Also included is a 20-megapixel auto-focus main camera with an f/1.8 lens, dual image stabilization and 4K video capabilities. The camera can also be used in front-facing photos or when the Axon M is folded.

A 3,180mAh non-removable battery with quick-charging capability is built into the handset.It also has dual speakers, a 3.5mm headphone jack and Bluetooth 4.2 and WiFi connectivity. USB Type C and USB 2.0 ports are also provided.

Rumors of a folding ZTE smartphone have been circulating for months, with the most recent reports circulating in late September saying that ZTE would likely beat Apple and Samsung to the market with their own such device soon.

Folding displays have been a goal of several mobile phone makers in the past few years as they continue to seek ways of differentiating their products. Samsung, Apple and others have been working on folding or flexible displays, but have yet to introduce a production model to the market.

For the past several years, smartphone sales in the United States have flattened as the market has become saturated with handsets of various designs from multiple manufacturers. As a result, many mobile market analysts have said that it will take significant innovations to stimulate sales enough to return sales to double digit growth in the U.S. any time soon.