Google just unveiled a massive update to Gmail, its very popular email client. In addition to a new look, Gmail has new features that will impact how you manage your inbox and even the messages you’re sending to others.

Google says it’s rolling out the updated Gmail in phases, so it could be a little bit before you’re treated to Gmail’s new look and enhanced capabilities. You can speed things along, though, by trying to get the revamped Gmail now. Just click on Settings — that’s the Gear icon in the right corner of your inbox — and select Try the New Gmail if that option is available. If you don’t like what you see, you can use the Settings to go back to the classic Gmail look.

Google is betting that you’re going to stick with the new version, though, and after spending some time in the new Gmail on my laptop, I’m impressed with the changes that have been introduced so far. Here’s a rundown of the most important changes Google introduced to Gmail and how they’ll affect you. (Note that not every new feature is available right now.)

Easily my favorite addition to Gmail are inline action buttons that pop up on a message in your inbox to give you quick access to frequently used actions. From left to right, the four inline icons let you take a message and archive it, delete it, mark it read or unread or snooze it. (More on that item in a moment.)

These buttons improve on Gmail’s old way of handling one-off tasks. Before, when I wanted to delete a single message from my inbox, I would have to click on the box to the left of the message, then click again on the delete button. The inline delete button lets me take care of that with a single click. (The old click-the-box-next-to-a-message trick is still the best way to handle multiple emails at once, though.)

At least several times a day, usually during working hours, an important message will pop up in Gmail that requires more of a thoughtful response than I can give it at the moment. My options are either to drop what I’m doing and respond or ignore the message and hope I remember to get to it later. Gmail’s new Snooze feature is a better approach to that latter problem. 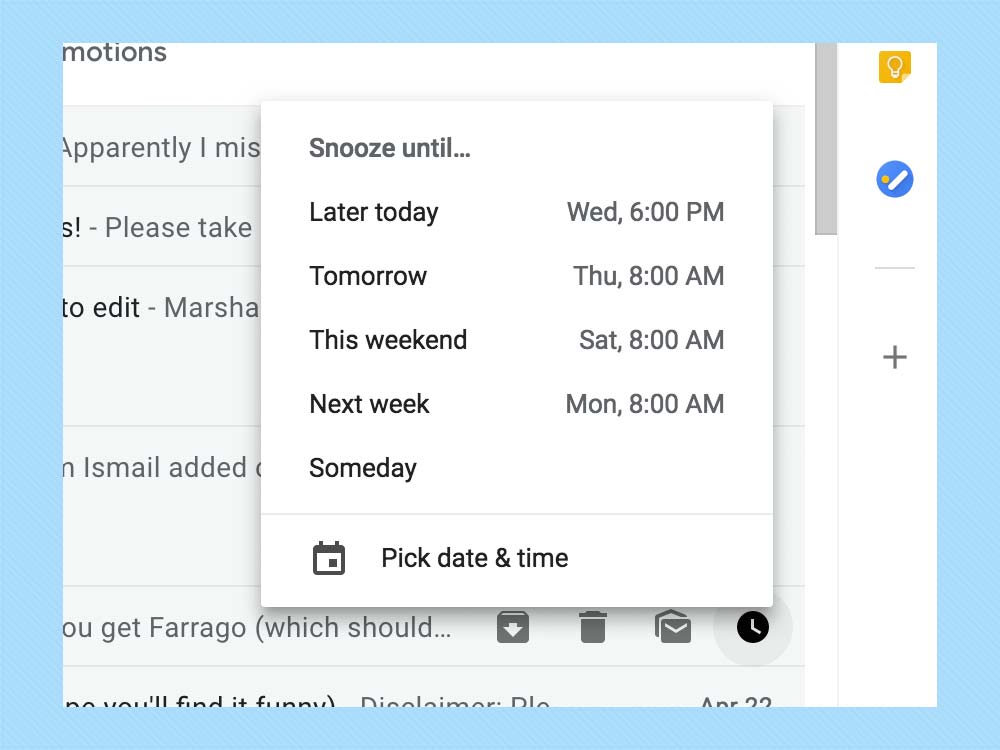 Select the Snooze option, and Gmail makes a message go away, only to bring it back to your attention at a later point in time. By default, you can make message vanish until later today, tomorrow, this weekend, next week or the disturbingly vague “Someday.” You also have the option of setting a specific time for that snoozed message to return to your attention.

Speaking of resurfacing messages, Gmail will now take matters into its own hands if it feels like there’s a message you need to respond to. The new nudge feature notices if you’ve left an email sitting for a few days without a reply or whether someone hasn’t yet respond to one of your queries; if so, an inline message will appear, asking if maybe you want to reply or follow up. 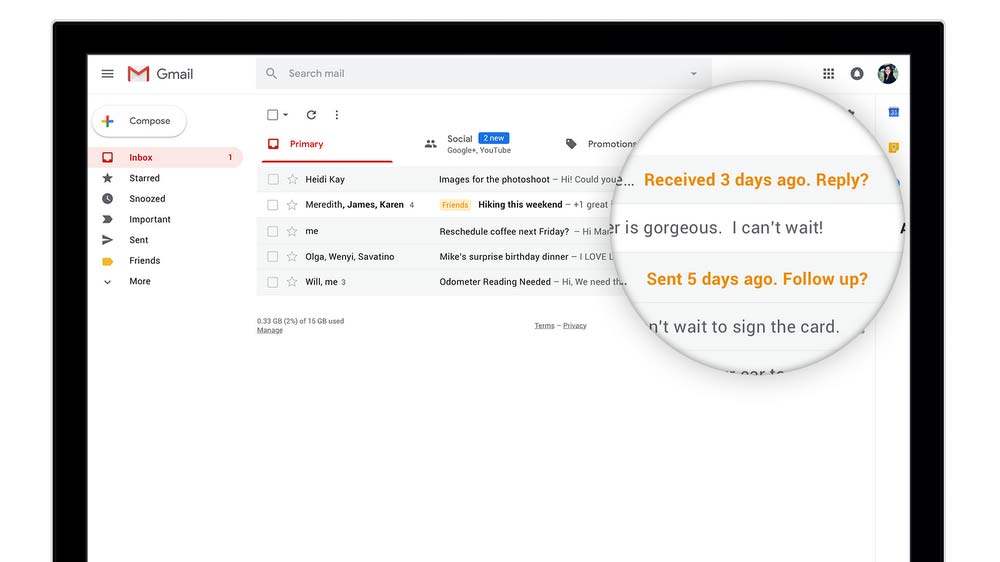 It’s unclear just how this feature will work, but I suspect Google’s tapping into its machine learning prowess to spot things like dates, deadlines and other calls to action. So far, in my tour of the new Gmail, I’ve yet to be nudged, and I’m interested to see how often these little reminders pop up. Few things are as annoying in modern life as the dreaded “just following up” email, so I’m hopeful Gmail doesn’t overdo it with the nudging.

The new version of Gmail looks enough like the classic version not to disorient you, but there’s a few noticeable differences to how your inbox looks. On the right side, you’ll see a strip of icons that link to Google apps like Calendar, Keep and Tasks (a new addition that lets you manage to-dos). As someone who has to take a moment to remember just how to reach the Calendar app, I appreciate having a quick link to it close at hand from Gmail. I’m less inclined to care about quick links to Keep, which I don’t use, or Tasks, which I’m unlikely to, but they’re not taking up to much space. A plus icon lets you add more G Suite apps if you’re into that sort of thing.

The left pane on Gmail — the one housing various folders and inboxes — looks familiar save for one addition. Click the menu icon next to Gmail, and you can make that pane collapse, giving you more screen space for your emails.

Action buttons aren’t the only thing that have gone inline for Gmail’s refresh. Attachments now appear inline, too, so you can open them without having to open a message first. This can be a real-time saver if you’ve already read the message and just need to get to the attachment quickly.

Microsoft Word documents, PDFs and photos appear in a pop-up window. Clicking on an attachment that’s a Google Doc will open a new tab in your browser (or at least it did for me).

One of the most-talked about features coming to this update doesn’t appear to be available yet, at least not in the version I’ve been testing. But when Gmail’s Confidential mode does appear, you’ll be able to send self-destructing emails to people — or at least, messages that expire at a time of your choosing.

Confidential mode works much like it was described when word of the feature leaked out earlier this month. You’re not really sending a message, but rather a link that your recipient follows to read what you have to say. It’s an ideal solution to sharing sensitive information you’d prefer not to leave lying around someone else’s inbox.

What’s more, integrated rights management features coming with Confidential mode will let you block a recipient from forwarding, copying, downloading or printing confidential messages. The Verge reports that two-factor authentication for confidential messages will also be added to Gmail, requiring recipients to enter a passcode sent to them before they can read any confidential message. Again, though, I haven’t had a chance to try any of this out first hand. 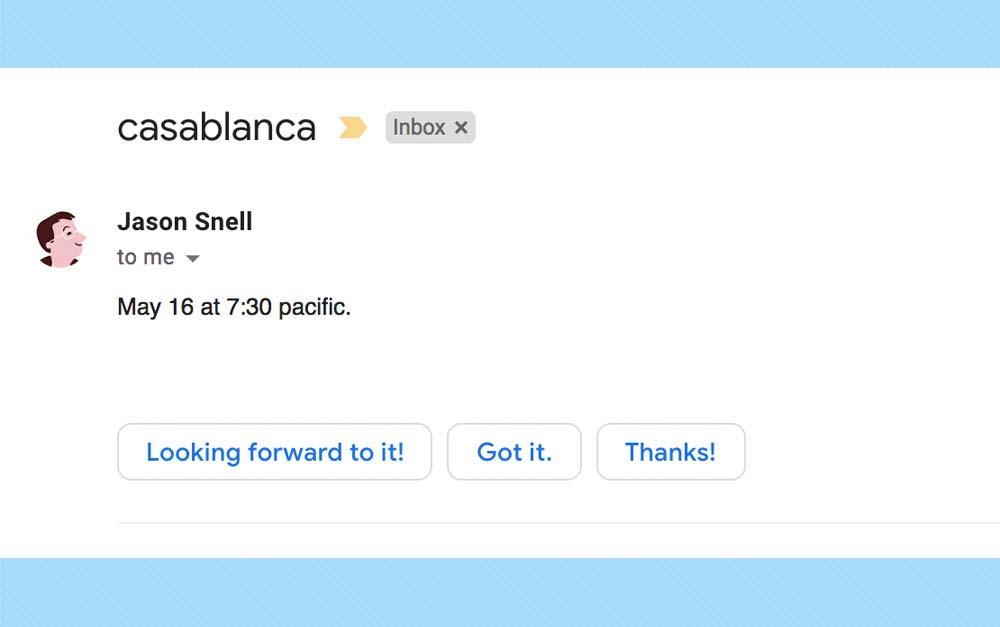 If you use the mobile version of Gmail, you’re already familiar with the Smart Reply feature that puts tappable canned responses in a message to help you quickly reply. That feature’s made its way onto the desktop, saving you from unnecessary keystrokes when all you need to do is confirm that a meeting time is good for you. 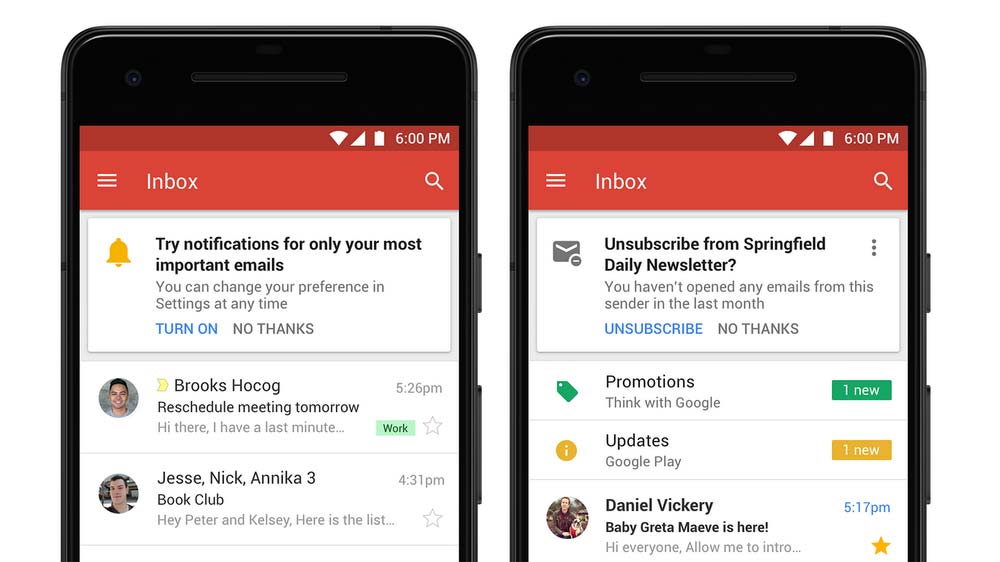 Google lavished most of its attention on the desktop version of Gmail. But the Android and iOS versions are getting an update, too. High priority notifications will alert you when important messages come in. Gmail will also start suggesting that you unsubscribe from mailing lists and newsletters you never bother opening — a variation of a feature already built into the Mail app on iOS.